This is an hour long special in honour of Louis Riel Day (18th Feb, 2013 in Manitoba) presenting Aboriginal music of Turtle Island with a focus on Métis music. There are also segments talking about the history and life of Louis Riel. I hope you all enjoy.

Performers are Raymond St-Germain, Winston Wuttunee, Hawk and Eagle, Shingoose, and many more. 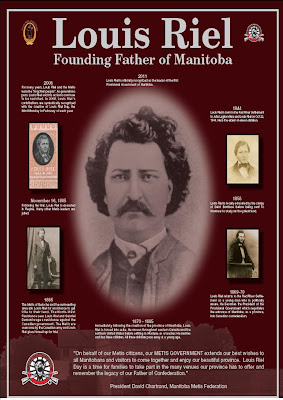 Human Rights of the Métis﻿

The List of Rights was prepared as part of the proclamation of the provisional government for the Northwest Territories, on December 8, 1869, following the capture of Fort Schultz. It was styled as the Declaration of the People of Rupert's Land. Written by Louis Riel, aided by Father Georges Dugas and Father Ritchot at St. Boniface College. The Bill of Rights was prepared at a "Convention of Forty" (20 English-speakers and 20 French-speakers) convened on January 26, 1870 to replace the List of Rights which had not been adequately debated. It was written by Louis Riel, Louis Schmidt, Charles Nolin, James Ross, Thomas Bunn, and Dr. Curtis Bird in just 2 days. It too emphasized bilingualism, protection of the lands of long-time residents, and democracy.

The Metis Bill of Rights, December 1, 1869 Canadian Northwest ----------------------------------------
1. The right to elect our Legislature.
2. The Legislature to have power to pass all laws, local to the Territory, over the veto of the Executive, by a two-third vote.
3. No act of the Dominion Parliament (local to this Territory) to be binding on the people until sanctioned by their representatives.
4. All sheriffs, magistrates, constables, etc., etc., to be elected by the people -- a free homestead pre-emption law.
5. A portion of the public lands to be appropriated to the benefit of schools, the building of roads, bridges and parish buildings.
6. A guarantee to connect Winnipeg by rail with the nearest line of railroad -- the land grant for such road or roads to be subject to the Legislature of the Territory.
7. For 4 years the public expenses of the Territory, civil, military and municipal, to be paid out of the Dominion treasury.
8. The military to be composed of the people now existing in the Territory.
9. The French and English language to be common in the Legislature and Council, and all public documents and acts of Legislature to be published in both languages.
10. That the Judge of the Superior Court speak French and English.
11. Treaties to be concluded and ratified between the Government and several tribes of Indians of this Territory, calculated to insure peace in the future.
12. That all privileges, customs and usages existing at the time of the transfer to be respected.
13. That these rights be guaranteed by Mr. McDougall before he be admitted into this Territory.
14. If he have not the power himself to grant them, he must get an act of Parliament passed expressly securing us these rights; and until such act be obtained, he must stay outside of the Territory.
15. That we have a full and fair representation in the Dominion Parliament.