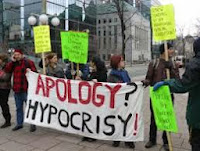 The Truth and Reconciliation Commission held a national gathering in British Columbia from the 16 to 22 September 2013. I thought it would be of interest to hear again the full speech and apology given by Prime Minister Stephen Harper on June 11, 2008. There is a feeling that the words of Harper were just that words. Some have started to say these words are without feeling or the actions that are required to minimally or substantially change the situation of First Nations, Metis and Inuit peoples in Canada in their relations to other Canadians.

Did Harper truly mean these words or was it an attempt to create political capital. Does it even matter. Will the future be created by leaders or by those working, living and interacting together in Canadian society.

The Speaker:
I invite the hon. members to rise as our distinguished guests enter the House and take their seats.

Hon. Peter Van Loan (Leader of the Government in the House of Commons and Minister for Democratic Reform, CPC):
Mr. Speaker, after the ministers' statements, the representative leaders may provide a response. So this can be done in accordance with the rules, practices and traditions of this House, I would ask unanimous consent for the following motion:


Hon. Ralph Goodale:
Mr. Speaker, on behalf of the official opposition, I will say that we are honoured to consent.
[Translation]

3 Reasons Why Government Shouldn’t Be Run Like a Business

Here is a video from some friends running a web-site called the Minute MBA. This video I found quick and entertaining explaining the difference between government and business. I would see these concepts applying equally well to Indigenous peoples. Although I see there some fundamental differences between American and Western concepts about the role of business. For example if we take the Aboriginal concept of holism this would allow Indigenous leaders or First Nations to create employment by creating companies. Americans would say the government has no role in creating companaies and the economy should be run and directed by the market place. Because these First Nation or Metis companies operate under a First Nations Government they are owned by share holders or citizens of that First Nation. The common good then becomes that of the First Nation. These companies should never be run without the idea they are owned by share holders and not specific leaders. Dr Wanda Wuttunee talks about First Nation companies and many of the issues that they face.

To see the Video and Learn more
http://www.onlinemba.com/blog/video-why-government-should-not-run-like-a-business
transcript from video

Open Letters to Louis Riel: Fulfilling the Winnipeg Dream: A Reason to Care: A Reason to Stand and Be Counted

Open Letters to Louis Riel: Fulfilling the Winnipeg Dream: A Reason to Care: A Reason to Stand and Be Counted...: Dear Louis, There is one principal reason I have decide to write you. I have discovered perhaps the greatest shame of Canada. You would not know it by living in the suburbs, but go past downtown and the bright buildings on Portage, go over the tracks and you will find the slums of Canada.


There is a continuing debate about Aboriginal education based on very different ideas about what is best for the children, Aboriginal peoples, Canadians and Canada. On one hand you have the idea that Aboriginal peoples need to integrate into Canadian society by having the same types of education as all other Canadian children. Aboriginal education is seen as being wishy-washy, short on ideas, hard to understand, providing little useful marketable skills, less rigorous than a western education, building to the lowest common denominator, an off-shoot of current educational experts (John Dewey descendants) attempts at child centered education that water down the great traditions of Western culture and civilization; it is simply a path that is not an advancement in education, but at worst a regression and at minimum a waste of time and money in feel good activities. Are these accusations fair?

Chief John Snow (Wesley Band of the Stoney Nakoda Sioux First nation) wrote in the 1977 that we should have a different type of education in Canada, one based on integration. “Of course I believe in integrated education. Let the neighbouring communities bring their children onto our reserve and we’ll do our best to integrate them” (book These mountains are our sacred places). While many would not see this comment as being serious Chief Snow was expressing the exact same view point that many non-Aboriginal peoples held concerning Aboriginal peoples.  Many Indigenous peoples in Canada believe that a separate Indigenized education system with access to similar resources as public system is not only necessary, but a Human Right (Article 26 of the Universal Declaration of HR). Others like Elder Winston Wuttunee are more pragmatic and hold that all students and humans should have access to the teaching of Indigenous peoples. Indigenous peoples have a duty to build understanding within all students. They have this duty because of their special connection to the land, earth and creation. We have as Winston says “a special role to play.”

Few actually understand many of ideas and the historical developments surrounding Aboriginal education. The idea of Aboriginal education as a separate field of study while it has gained currency as an area of expertise has not been wholly embraced. I was once told that the former Dean of Education at McGill did not believe in this field of study (anonymous personal communication). It is an area of education that is difficult to discuss do to potential accusations of racism and the high emotional issues that surround it. Many quietly question Aboriginal education as being a watering down of the standards that will enable students to obtain knowledge and skills useful for employment.

Though perhaps it is true that non-Native children should be taught in an Indigenous manner and Chief Snow has it right. Very few cultures in the world such as the Indigenous peoples in Canada have been able to demonstrate the high capacity for survival. The First Nations world-view has demonstrated stamina that even though it has been attacked, harassed and victimized it has still persisted to this day and in many cases is undergoing a revival and renaissance. Some have even called this interaction a form of genocide (Justice Murray Sinclair, Feb 17, 2012).

The debates about Aboriginal education run quite the gamut from institutions like the University of Manitoba promoting student support programs, to the Frontier Centre advocating a different Indian Control of Indian Education controlled not by chiefs and reserves, but by parents or even using a voucher system, to the First Nations University of Canada. Few though ask what we are trying to do; what are the intended outcomes, our long term goal. Some like the Dean of Extended Education at the U of Manitoba indicate that students outcomes must be tied to educational success and educational success is graduation from university; and this is the principal measure of success. Others like Aboriginal educator Audrey Richard write that success should be much more holistic taking into account not only academic success, but the way the student works and lives after they have completed some educational training. Other educational programs like the Le,Nonet program at U Victoria also discuss how students see success and it is generally it would be considered far more holistic.

It is certainly a very difficult area to make sense because of the many entrenched interests that often preclude the finding of solutions that meet the educational and holistic objectives of students, families, and communities.

Trust the Spirits: A Conversation with Winston Wuttunee

This is the 3rd part of a great conversation with Elder Winston Wuttunee. He discusses spirituality and the idea of chaos which we all see in the world today. He feels that all the great teaching in major religious are connected. We are all connected. “It takes a lot of bravado to say we are different.” When First Nations smoke the pipe we must trust that what is going to happen is true.

He talks about his daughter who while living in Vancouver had little access to Elders. Winston had trust that if he prayed that help would be given to his daughter. He knows that we need trust and trust will bring great understandings.

I questioned Winston about how society has been set up not respect the roles of Elders. Winston gave the example of a house he needed to paint. He also wanted to spend time with his son and so he paid his son a small amount of money for his son come and help paint the house. The son was a young man and very busy around this time with his education and young family. His son never knew it but they spent two days having teachings and spending a great time together. Many of the old people have their hearts broken when they are thrown away. Children are also so important to the world around us.

We must always remember that sometimes people will test you, you may never know who people they are, but if you have a little knowledge they will test you to determine if you are a good person.

We also discussed his recent honouring with a 2013 Indspire award in for his lifetime work in Culture, Heritage & Spirituality. The best bit is in the second half of part 3.


To Learn More (podcast and Interview)