The First Nations Child & Family Caring Society of Canada publishes the First Peoples Child & Family Review journal twice a year. The journal is dedicated to interdisciplinary research honouring the voices, perspectives and knowledges of First Peoples through research, critical analyses, stories, standpoints and media reviews. More information about submitting articles may be found on their web-site.

This is a conversation with Dr Jennifer Reid of the University of Maine about her book Louis Riel and the Creation of Modern Canada.

Since he was tried and hanged for treason in November of 1885, Louis Riel has been the subject of more histories, biographies, novels, and poetry than any other figure in Canadian history. Politician, founder of Manitoba, and leader of the aboriginal Métis people, Riel led two resistance movements against the Canadian government: the Red River Uprising of 1869-70, and the North-West Rebellion of 1885, in defense of Métis and other minority rights.

Against the backdrop of these legendary uprisings, Jennifer Reid examines Riel's religious background, the mythic significance that has consciously been ascribed to him, and how these elements combined to influence Canada's search for a national identity. Reid's study provides a framework for rethinking the geopolitical significance of the modern Canadian state, the historic role of Confederation in establishing the country's collective self-image, and the narrative space through which Riel's voice speaks to these issues.

This is a conversation with Ms Alena Rosen a Master's student in the dept of Native Studies at the University of Manitoba about her passion and work in Inuit art study. Alena gave a presentation in the Native studies colloquium series on March 2, 2012 about Inuit art entitled, Inuit Art, Inuit Voices: The possibility of a critical Inuit art discourse.  Alena has a great understanding of the history of Inuit art, its forms both in sculpture and print, the changes brought about by star artists, the concepts of folk art, the effect it has upon the economies in the North and communities as well the aesthetic qualities of Inuit art.


Alena Rosen is from Toronto, Ontario. In 2007, she completed her B.A. in Philosophy and Social-Cultural Anthropology at the University of Toronto. Her subsequent work experience at the Museum of Inuit Art in Toronto spurred her to pursue a graduate degree, and in 2010, she moved to Winnipeg to join the Department of Native Studies at the U of M.
Alena writes that her "research aims to recognize and emphasize Inuit perspectives on the creation and dissemination of Inuit art.  It also examines the relationship between Inuit art, and the production and transmission of Inuit knowledge within the context of colonization." She hopes her work will "contribute to a critical Inuit art discourse that can act as a counterpoint to established and on-going debates on Inuit art in academia and art institutions."

To Learn More (Podcast)
http://archive.org/details/AlenaRosenInuitArtInuitVoicesThePossibilityOfACriticalInuitArt
Here are some musical selections that Alena suggested for your pleasure: 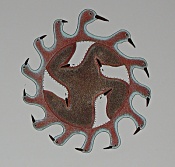 A Wilder West: Rodeo in Western Canada a conversation with Mary-Ellen Kelm 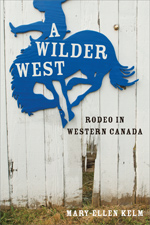 A controversial sport, rodeo is often seen as emblematic of the West's reputation as a 'white man's country.' A Wilder West complicates this view by moving beyond the black and white to show how rodeo has been an important contact zone between settlers, Aboriginal peoples and governement. It is a chaotic and unpredictable place of encounter that challenged expected social hierarchies. Rodeo has brought people together across racial and gender divides, creating friendships, rivalries, and unexpected intimacies. Fans made hometown cowboys, cowgirls, and Aboriginal riders local heroes. Lavishly illustrated and based on cowboy/cowgirl biographies and memoirs, press coverage, archival records, and dozens of interviews with former and current rodeo contestants, promoters, and audience members, this creative history returns to rodeo's small-town roots to shed light on the history of social relations in Canada's western frontier.

Mary-Ellen Kelm is a Canada Research Chair in the Department of History, Simon Fraser University. Her previous books include Colonizing Bodies: Aboriginal Health and Healing in British Columbia. She is one of the leading scholars in the history of Canadian Aboriginal peoples. Working in collaboration with First Nations and health researchers, Kelm has a record of producing groundbreaking research on the history of Aboriginal health in Canada. Her current research examines how Aboriginal health has been researched over the course of the 20th century. She is studying the contributions made by Aboriginal people, as well as by anthropologists, health-care providers, and government in defining Aboriginal health issues. In the course of her research, she is paying particular attention to the relationships of power that are inherent to medical research and to emerging ethical dilemmas