A Sacred Journey For Future Generations: Marching for Human Rights

﻿﻿Nancy Cycil Greyeyes originally a marcher with A Sacred Journey For Future Generations (under the guidance of Bruce McKenzie)  is now walking with another group Journey for Earth going into the populated areas of Ontario. These groups have been marching from Stanley Mission (Saskatchewan) to Toronto to Ottawa; a trek of over 3450 km between March 16-June 21.
﻿﻿
In an interview with Nancy Cycil Greyeyes (Cree) from Muskeg Lake Cree First Nation we talk about why she has put her life on hold to march to Ottawa. She is concerned about Idle No more and the lack of consultation that federal government has used to pass laws which she terms illegal. She feel that there is an illegality in the governments actions in passing Bill C-45 which will lead to the destruction of the environment, because there was no free and informed consent on the part of First Nations people. Nancy talks about how it will be the seven generation who will have it hardest because when the water can no longer be used or you can no longer feed yourself on the land, that generation will have nothing. We had our conversation during the groups arrival in Winnipeg on April 22, 2013 during earth Day celebrations. They had marched from Central Park to the Forks (Oneda Circle for a ceremony) and on to Thunderbird House where a feast was held late into the night. We talked beside Winston Wuttunee (Cree Elder) and Arden Ogg (photo taken Arden).

I asked Nancy about Idle No More (INM) and wanted to know if she felt that INM had made an error in talking about treaty. Many Canadians see the idea of treaty as special rights and some are very opposed to treaty for this reason. I asked should INM have been talking about Human Rights translate the terms into something that the average Canadian can understand. Nancy said "treaty is not just about the land, between men it is between all of creation. We have Treaty with the animals, the moose, the birds, the water, the land. We have broken our part of the Treaties" and we will suffer for breaking the Treaties. This is why Nancy walks.

Why is it that Natives March? Why do they not stay at home and protest, why do they walk thousands of km to go and see the "Great White Father"? As an anthropologist this is perhaps the most interesting aspect of INM. Instead of having a riot and destroying property Natives they walk and bring an angry message based founded on peace about promises that have not been respected and the injustice of the system. In 2010 I walked with Michele Audette and her Marche AMUM (Quebec City to Ottawa) marching for changes in the Indian Act and the rights of women and the children. I have interviewed Leo Bastawang about his March4Justice (2012) and the Indian Act as a colonial piece of legislation or the The Journey of Nishiyuu (2013) from the Cree community of Whapmagoostui walked to Ottawa inspired about INM and Bill C-45.

As the Indigenous peoples we continue to march and demand justice through action. 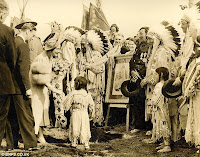 In celebration or remembrance of Queen Victoria Day in Canada. I invite you to see this article from the Mail about King George VI who met some First Nations in Canada on his first trip as King to Canada in 1939. The photo is dated May 26. He was shown a picture of Queen Victoria (his Kokoum-grandmother). The two chiefs greeting the King are also wearing treaty medals as well as one is wearing a treaty uniform given to chief who had signed treaty.

There are many things to reflect on this day concerning the history of this day and it importance to the relations between the Aboriginal peoples of Canada and settlers societies.

The Mail from England calls the Indigenous peoples Indians and not First Nations, it is their term not mine. So Happy Victoria Day.

Winston Wuttunee, A Life of Music and Spirit: The Early Years

Cree Elder Winston Wuttunee was in the studio and completed a series of interviews about music, spirituality. Here is a discussion of his early life as a musician and the events which shaped him as a human and allowed him to grow spiritually as a human being.

Resume:
Winston initially talks about music and how young Aboriginal Cree youth traditionally would learn music in the family in his time. Winston's father was the farm instructor at the local IRS. A place that Winston refused to say the name out loud. Winston's father was born in 1892 and was well educated having earned a grade 12 education at the IRS. His family was eventually moved to Battleford when Winston was only 2. The family did not speak English at home for they only spoke Cree, but he sure did learn English quickly. His father soon started a business of a livery stable (horse repair shop). After that he created another Business selling water and delivering water from house to house for 75¢ a barrel. Whenever he would come home after work he would empty his pockets full of coins and Winston's uncles Bill and Noel would then come over and help him count the coins. The family become quite well off and eventually Winston's father would start selling and delivering ice from house to house.

Winston and my father (James Ouelette as recorded on the birth certificate and with Indian Affairs but he always used Ouellette) would fight side by side against the other Moonyas children. They were very smart because they needed to be. They were able to run extremely quick. They would place rock piles around the streets in corners in order to defend themselves against the Moonyas (white) children. I asked if there was some racism at that time period and Winston there was just some racism Robert but a lot. Even though there was racism in the town from the RCMP and others, still members of the family were popular in school and they were able to take roles of responsibly like speaking at assemblies, music or defending fellow Neechi, brothers and sisters. “We were able to take these roles because we are Wuttunee descended from chiefs, it is in our blood.” Wuttunee means Golden Eagle Feather.

Winston also told more stories about North Battleford and the old times when he was growing up. Winston also discussed the environment and the role that Moonyas culture has taken in destroying the land that we live on and air we breathe!

Winston is a 2013 winner of an Indspire award for his work as an elder and in spirituality. This is for many the Noble prizes of the Aboriginal peoples in Canada.

This is a conversation with Hope McIntyre concerning her latest play Jail Baby co-written with Cairn Moore. It presents the life of character Jasmine, a composite fictional protagonist demonstrating the lives of women who are in prison and who have or who are about to give birth to children in prison. Jail Baby was created in partnership with the Elizabeth Fry Society of Manitoba after recognizing the need to share the stories of incarcerated women and women moving in and out of the justice system. Work and research was conducted over 3 years with actual women incarcerated in Alberta and Manitoba. Hope and Cairn held workshops with participants that allowed the research and discussion to be frank and worthy of presenting the stories of incarcerated women.

While it is not just an Aboriginal story, 1/3 of all women in prison are Aboriginal and it is a too common experience in various segments of society. Activist Sel Burrow feels that prison should be the final answer to issues of poverty, racism and social conditions that too many of these women face. The interesting work of Hope and Cairn is the idea that while in prison rehabilitation needs to occur in order to break the negative support groups that congregate around these women, replacing them with positive support groups.  At the completion of the writing of the play the women who participated were given the chance to review the work, make comments, offer input and act out various scenes. During the production of the play (May 16-23, 2013) many of the women will be present, and there will be a chance to discuss directly with the actors and women afterwards.

Jasmine bursts into the world unlike your typical new born child and is anointed a “jail baby.” Born in prison, raised by a mother who revolves in and out of the correctional system, tossed in and out of foster care, Jasmine is destined to become one of society’s monsters. When she finds herself pregnant and facing her most serious charge yet, Jasmine is horrified at the thought of having her unborn child repeat her life of despair.
Through a series of hilarious parodies, the myths of prison life for incarcerated women are presented and weaved together with Jasmine’s journey. From bad prison B movies to Kangaroo Court, the ensemble of characters turn common beliefs on their heads in order to make the audience question their preconceptions of criminalized women.