Where the Waters Divide: Neoliberalism, White Privilege and Environmental Racism in Canada

Dr Michael Mascarenhas has written a masterly book Where the Waters Divide: Neoliberalism, White Privilege and Environmental Racism in Canada that demonstrates many of the issues facing Aboriginal and non-Aboriginal relations in Canada. Using water as a backdrop to look at the larger issues of the why Aboriginal peoples see themselves as being in an inferior position and why non-Aboriginals do not see any issues because the system is colour blind and based on common sense. Michael is able to clearly state what neo-liberalism is which unfortunately most Canadians both Aboriginal and non-Aboriginal fail to adequately understand. Michael demonstrates the neoliberal economic bias within the Canadian political system and how it affects not only First Nations, Métis and Inuit peoples but all Canadians. He has been able to analyze how contemporary neoliberal reforms that came to the fore within Canada and the Western world since the 1980s with de-regulation, austerity measures, common sense policies, privatization and show how they have shaped contemporary racial inequality in Canadian society. 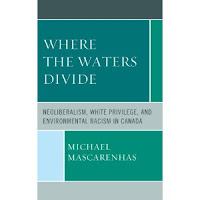 Michael has brought together theories and concepts from four disciplines; sociology, geography, Aboriginal studies, and environmental studies to build critical insights into the race relational aspects of neoliberal reform. “In particular, the book argues that neoliberalism represents a key moment in time for the racial formation in Canada, one that functions not through overt forms of state sanctioned racism, as in the past, but via the morality of the marketplace and the primacy of individual solutions to modern environmental and social problems.” Because many Canadians are no aware of Canadian history and how the economic system in Canada came to formed they are not aware of how most Canadians have benefits from the past policies which still affect a system wide racism in the economic policies. The Economist writes that the greatest challenges are not based on redistributing wealth, but ensuring mobility for large social classes within society and economic systems. The average Canadian is “not aware of this pattern of laissez faire racism, and because racism continues to be associated with intentional and hostile acts, Canadians can dissociate themselves from this form of economic racism, all the while ignoring their compounded investment in white privilege.”

Dr Michael Mascarenhas joined the Science and Technology Studies Department  in 2007. Dr. Masarenhas completed a Post-Doctoral Fellowship at the University of British Columbia in 2006, and received his Ph.D. in Sociology from Michigan State University in 2005. His current research examines the relationship between recent environmental governance regimes and their impacts on social relationships and structural hierarchies. In over a dozen publications, he has written on water, wolves, seed-saving, standards, supermarkets, family farms, and forests.

Where the Waters Divide: Neoliberalism, White Privilege and Environmental Racism in Canada by Michael Mascarenhas.

To Learn More (Interview and Podcast)